For any add-on boards such as VR conditioners, optos and OEM interface boards
Reply

By ttommyp -  Wed Aug 14, 2019 12:11 am
-  Wed Aug 14, 2019 12:11 am #37107
Hello,
First I'll state my "goal". Id like to make a analog gauge cluster via servo/steppers with information pulled straight from Speeduino. Im aware there are "easier" ways to create arduino analog gauges, but thats not the point. I want these gauges to be supplied with their information via CAN BUS and an additional mega unit running DxControl-GPIO.

Second, Ive been reading through the wiki on DxControls-GPIO which does seem to be pretty thorough. I conceptually understand HOW can works, however I DONT have even a basic understanding of how CAN addresses work!! Im having a hard time finding even where to start after a handful of google searches. So any direction for a NEWB would be greatly appreciated!!

If its not too much to ask would someone help me out to start, as to how I would say pull the analog signals for coolant temp, air temp, or map values (guessing 0-1023) into a unit running DxControls and view in TS?

Now go into device configuration in gpio and configure those values you just setup.

Now in external input sources , choose the data from speedy you want to use( in the wiki the example is for tpsadc).
Add some alias names that make sense to you so you know what data you have chosen.

That's it, gpio will now happily collect the data from speedy via serial3 and you can see it from your TS gpio project .

Now the next part , if I understand you correctly you want to have a dash with analog meters that gets its data via canbus?

Now there are a few ways to do this.
Easiest, use the 11bit broadcast config and assign a address to the data you want broadcast and gpio will get on with it.

You don't need to know how addressing works if you are doing your own thing( but there are plenty of books or online resources( check out the kvaser site for really good info or even Wikipedia is a good start).
You can choose any addresses you like if it's your project, or use addresses that an OEM might use( every OEM does this different though).
Only thing to remember, the lower the address the higher it's priority.
Of course you could add the analog needle drive code into gpio and run it directly.. but that's a different option again.
Quantum Coupe with V04 on Ford 1.4CVH,Quantum 2+2 with Custom V04 on Jaguar 3.0l AJ30 V6
mini GPIO :done More soon
CANbus broadcast interface: done
Simple sd logger :done
External CAN io: Inputs :done
Gearbox controller: working


Of course you could add the analog needle drive code into gpio and run it directly.. but that's a different option again

I've thought about this. The "knob" example in the servo section of the arduino forum would be simple. Just include the servo.h library and map the analog values 0-1023 to 0-180 or what ever degree of rotation on the servo. This option maybe slow responding though..

I've played around with steppers , but the libraries, and additional code maybe a taller task of integrating with the gpio code than I'm capable of. There is the extra hardware too, a driver for each gauge. Small servos can be attached directly to megas outputs.

I am eager to here how your gauges turn out Nick, I know steppers are a popular option! My $17 aftermarket tachometer is actually a stepper drive! I bought another to convert into a speedo, but that's for another thread

NickZ wrote: ↑
Wed Aug 14, 2019 10:25 pm
Ive just sent off a design for a gauge using Switec x27 steppers and each one is serial data controlled and use a ATTINY85 and can be daisy chained together. will know next week if they work.

I have some posts here from a few years ago of little PCBs I made that direct-mount to the stepper motor and use ATTiny85s to drive them.

Here is one of my converted standalone gauges using a X27-168 gauge stepper motor, with a little motor-mounted PCB that holds an ATTiny, voltage regulator, etc. Just +, -, and the signal (in this example from the fuel sender). The chip is programmed to know where to point the needle based on the voltage signal it receives between 0 and 5V: 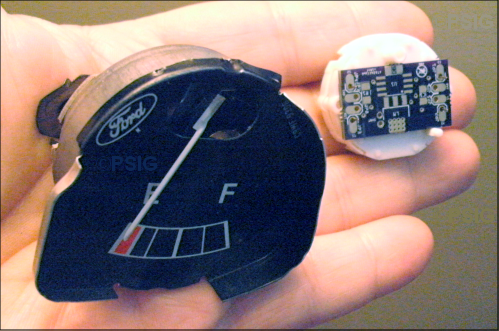 Those are perfect! Do you sell these?

By PSIG -  Thu Aug 15, 2019 8:57 pm
-  Thu Aug 15, 2019 8:57 pm #37152
Note that mine are not serial-controlled with a feed from a central processor like Nick's, but completely stand-alone with direct sensor control; although they can be configured for most anything you want of course. If that's what you're after, I should have a few boards around. They were developed on a closed-source project, but the boards are available. If you want more than a couple, let me know in PM and I'll set it up.

If instead you want gauges controlled by a central controller (Mega, Nano, Teensy, etc), then you don't need an ATTiny, and you can just drive the gauges directly with the processor, or though a board such as GPIO. Depends on what you're after.

ok, I am an idiot. Ignore last post. Ignition out[…]

If you put your engine coolant temperature sensor […]

That was fast! I really didn't expect so many answ[…]

Hi all, Michael, Sorry for the delay, not easy to[…]